I’ve spent the day at Bristol Mini Makers Faire, the greatest show-n-tell in the south west. Big thanks to Ruth, Beth and all for having me. I’ve been inviting people (adults and children) to modify an ongoing/evolving double-page spread comic collage made out of stuff. Something like my usual digital workflow but done with paper and card on a real desktop. The results were surprising and interesting – much more a piece of visual art than a narrative, but there are elements of story. Look out for the caterpillar to butterfly transformation, and the wedding proposal, for example.

I’ve dubbed it an “acousticomic” as a play on “electricomic” – the gradual transition between panels, unevenly across the page is similar to the effects in Lars Schwed Nygård’s Birds of Twilight Park, or Tzvi Liebermann’s  Imperium, for example. Moreso than in many traditional print comics, for sure.

There’s more to come – I did a workshop, out of which evolved a story of an infinite martian lunchbox, which I’m very excited to complete – but for now, enjoy the sequential chaos. And if you’re in town for the Lakes International Comic Art Festival in October, come along and join in. I’ll be doing something similar on the Saturday (kids zone in the morning, workshop with adults in the afternoon). 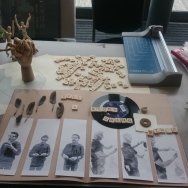 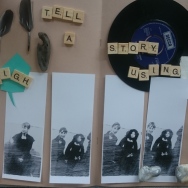 Footnote- about “scribblebots”. They’re little robots made from an inverted plastic cup with four felt pens for legs, and a little motor at the top. Take the lids off their feet and switch them on and they draw lovely random patterns on paper. Somebody was making them with kids at the fair, and the last few images use a scribble-bot generated backdrop that a passing customer/visitor kindly let me use.