A lot of 1’s and 0’s have been hurled into the internet void already over Jonathan Jones’ ill-advised and disrespectfully rude piece in the Guardian on Terry Pratchett, literature, snobbery and whatever else it was about. Some goods words written here and here, and undoubtedly elsewhere. Time to chuck in a few observations of my own. I’ll try to be brief.

First off, a disclaimer – I’m something of a snob regarding books (films, comics, cereal packets etc.). I like my stories difficult and troublesome on the whole. My all-time favourite book, Riddley Walker by Russell Hoban, is written in an imaginary language,  just to provide a yardstick. But then, I program computers for a living, I like doing crossword puzzles. I’m not altogether comfortable if I know what’s going on. So, at some level, I can get where he’s coming from.

The ability, and desire, to absorb oneself in an imaginary world that abides by it’s own rules, is pretty much classic geek stuff. I think a lot of us have strong opinions of what we do and don’t like / respect.

On Pride, and Prejudice

Jones appears to be a different kind of snob – one with more of an eye to his audience. When he talks of only recently reading Jane Austen, he describes the shame he feels. I don’t get where he’s coming from here, I don’t feel shame (or pride) about what I have or haven’t read. I’m not stubborn about it, I’ll take recommendations from people, but I don’t feel that I “ought” to be reading something because everyone else is. (Disclaimer – I haven’t read many Discworld novels, just a few early ones. I gather I’m in for a treat when I get round to catching up…) Anyway, it feels like too much attention on the peer group/audience can only detriment the attention one’s actually paying to the work itself, which is surely what counts? (Is it? More on that at the end.)

(Apologies to Jane Austen for cheap pun above, couldn’t resist. Nothing personal, I’ve enjoyed some of her books, and film adaptations…)

On Magic and Reality

Second observation, quickly – his choice of who does count as gravitas-laden titans of literature is intriguing, not for what it says about him, but about the acceptance of genre fiction and it’s conventions. He refers to the recent deaths of Gabriel Garcia Marquez (I’ve read his stuff, FWIW) & Gunter Grass (I’ve not read his stuff, FWIW), both of whom work firmly in the magical realist tradition, as far as I’m aware. As an unoriginal geek snob, this is where I tend to pitch my tent, with works that use fantasy or sci-fi elements to discuss reality, and I can distinctly remember pushing Marquez’ work as a sterling example of “real literature” with a fantasy element on various authority figures in the 1980’s, only to be told that he was not (to paraphrase Gilbert Norrell) a respectable author. It seems kind of revealing that our notion of “timeless” classics changes so quickly. Also at odds with the emphasis on realism as a good thing that he stresses elsewhere (the title of the piece starts “Get Real”, and he lauds Austen for her description of “the complex real social world of regency England” – arguably of a narrow upper-class slice of that world, and attempts such as Pinter’s film to add grit to Austen haven’t really worked IMHO).

I’ll finish with an almost complete aside – as I recall, the argument about Marquez’ literary merits is played out in Gilbert Hernandez’ excellent Human Diastrophism (the teacher that Heraclio is lift-sharing with poo-poo’s him as “exotic” or “irrelevant” or some such). This is not the most relevant clip, but only one I can find online at short notice (Carmen’s reading “100 Years of Solitude”, and later throws it in a river, if memory serves…): 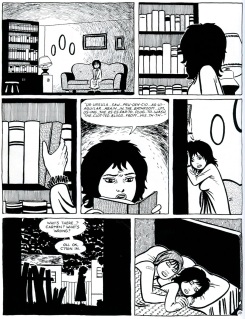 I’m not having a dig at Marquez’ writing here, and neither is Hernandez. That’s what the people in the story do, because of who they are.

Anyway, this leaves me wondering about the social versus personal extremes of literary appreciation. Jones seems to read in order to get the validation of his peers. For me, reading’s a solitary activity. It feels like we’re two extreme ends of a spectrum here, and maybe sanity lies in the middle somewhere? Popular writers like Pratchett (and Neil Gaiman, and Douglas Adams, to pick two more names OTOH) certainly seem to have generated positive, supportive communities around their writing, and being a part of that community, through having read, and talked about, their books, seems eminently healthy to me.

But what do I know? Why do you read what you do?