It started with a tweet – this one in particular, from comedian Adam Conover. Just in case that corner of the internet disappears overnight, here’s the picture that he posted, as “the most obsolete book ever”: 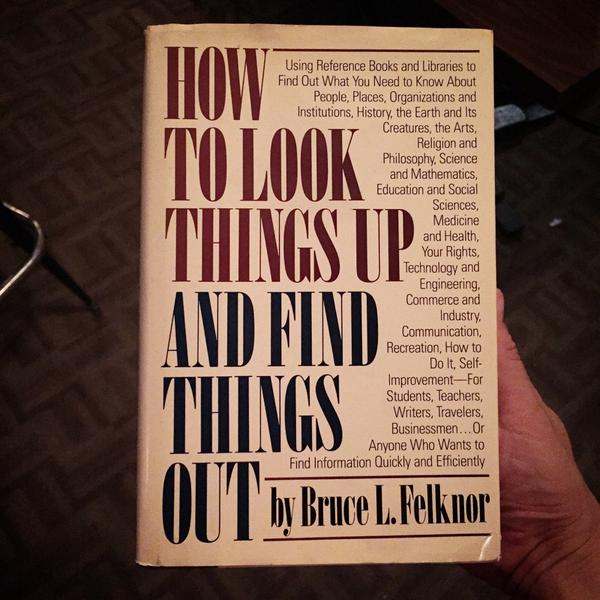 Because nowadays, we just look it up on google (yandex, bing, baidu, whatever competitor -I’m using the brand name “google” with a little”g”, in the sense that a vacuum cleaner is a “hoover”).

Anyway, looking up and finding things out is easy now, right?

Being a natural curmudgeon, my first instinct was to spoil the party and prove it wrong, find the loophole, etc., so I tweet back some riposte about getting distracted by the number of other open tabs (and yes, this is one of them, I’m “supposed” to be doing something else this evening, not writing this article-cum-rant).

No time to fix the internet tonight, but it kept bugging me. Little-g google doesn’t instantly connect us to the truth. What book should we have in it’s place? And if Mr. Felknor’s dead-tree tome has anything about critical thinking, cross-checking references, etc., then how obsolete is it?

Let’s take a simple factoid, free-flying through cyberspace that I also came across tonight while not doing what I was supposed to: Wolves have changed the course of the rivers in Yellowsone Park since they were reintroduce in 1995. Watch this, and tell me it ain’t so. I was moved, and humbled, and amazed. Then I read this article by Arthur Middleton, which basically trashes the story of the Yellowstone wolves.

Ah, but editorial bias, I thought… The second article’s by the New York Times, I thought, and they’re in my bad books just now for publishing an editorial trying to discredit ecologist/campaigner Vandana Shiva as a hippy crackpot. So I can discount the discomfort that Middleton’s article caused, and return to my fuzzy sense of eco-well-being, right?

Except for those pesky details. If you were paying attention,you may have noticed that the editorial was published by the New Yorker, whereasMiddleton wrote in the New York Times, completely different outfits. A stupid mis-step during a moment of internet downtime/factoid grazing on my part, but these things do take on a life of their own:

“A lie gets halfway around the world before the truth has a chance to get its pants on.“

wrote Winston Churchill, in the stone age days before little-g googling rescued us from the antiquated horrors of books like Mr. Felknor’s. I’ll leave it as an exercise to the reader to google a few humorous anecdotes of misguided mistruths that have been parrotted all over the internet, with which to decorate this remark.

Getting Back to the Wolves…

And if you had read the article in the New York Times (and I suggest you do), you’d see that the author advances a somewhat nuanced argument:

Do I agree with Middleton, then? Is he right? Is he going to get the Golden Seal of Truth as far as the Yellowsone wolves are concerned? If I agree to point 1. do I have to agree to point 2. as well? I’m not going to say, I haven’t the authority or in-depth knowledge to make my mind up right now. But he sure poses some interesting and uncomfortable questions about whether a mistruth can do more good than the truth.

May the Gods poke me with an uncomfortable question every time the complacency of instant dehydrated Truth settles upon my brow, whether it comes from the internet or not. For that way lies the stony death of the mind, heart and hand.

And now you must excuse me, while I attend to something that I’ve persuaded myself is more boring than writing this. As I have opened an extra ten tabs in the course of writing it so far, don’t rate my chances of getting that task done tonight, of course – maybe my first response was actually the most telling one?

And I leave it as an exercise to the reader to condense this into a pithy 140-character tweet, something I completely failed to do.