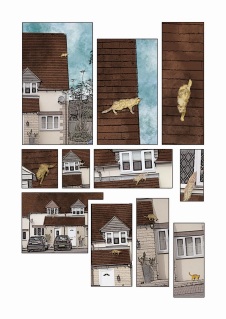 Observed from my living room the other day, and luckily, I happened to have the zoom lens camera to hand.

The cat took about five minutes to figure out the safe way down, trying one thing after another. Describing this maze-walking algorithm via the panel layout, a flattening of the geometry of the house seemed appropriate.

I love working with regular grids on the whole, in part because I don’t have to think to much about the layout. This exercise forced me to do a bit more thinking, emphasising long drops, distance and tight turns in the panel shapes.

But wait, look at the middle row – at this point, the cat changes direction, and starts to walk from ight to left across the rooftop. I’ve depicted this as a series of panels arranged left to right, in the conventional (Western European/Anglicised) reading direction. the reader has to scull across the page in the opposite direction to the cat, and it comes off a little muddled.

But if I order the panel sequence right to left, won’t that be equally confusing?

I think it worked, don’t you? I broke one of the fundamental reading directions, so helped guide the reader by preserving the other : top to bottom. To guide the eye, I’ve staggered the middle row downwards a little, and created a smoother reading experience that better describes our protagonist’s epic journey!

seeing as I’m all loosened up now, panel-wise, let’s add a little flourish. I wasn’t fast enough to catch a snap of the cat in mid-air, but picking on some random cat from google images, I can add a silhouette easily enough.

This moment is the finale of the story – the cat makes the leap from rooftops to ground, from imprisonment to freedom, from faith to knowledge, from here to eternity, from Russia with love… well, you get the idea. In previous takes, this happened between the panels, in the reader’s imagination, and that’s no bad thing – in fact it’s at the very core of reading comics.

Here I’ve made the leap more explicit, but still not depicted it quite as explicitly as the rest of the strip:
– no borders, signifying the transient, almost mythic status of this moment
– the cat’s flying through the sky, so echo the sky colours from the first two panels, helping to pull everything together
– I made the strange and scary leap away from an A4 page, embracing the possibilities of digital comics, and the infinite plane that Scott McCloud’s been extolling us to use for over a decade!

Here it is then – what have I gained and lost by pulling the climactic finale out of the gutter (that’s the little white space between the panels) and onto the page?