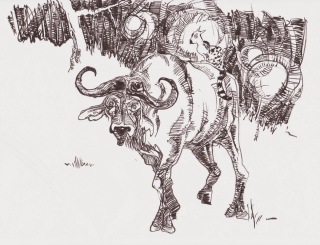 A genet (a cat-like animal) has been caught on auto-triggering infra-red night camera riding on the backs of buffalo and rhino, behaviour never observed before. I wonder what they’re both thinking?

The sketch was also an attempt to figure out some of the magic done by the late Sergio Toppi, italian comics maestro extraordinaire, whose black and white work is an incredibly intricate interplay between solid whites and blacks, and passages of amazingly fluid detail. I would hesitate to compare this to his stuff, but I felt I’d got a better understanding of how he does his compositions after I’d finished. Go look him up on google, or better yet, get a copy of his “Sharaz-De” from Archaia.

Finally, apologies to the genet for making it look like a sock puppet!