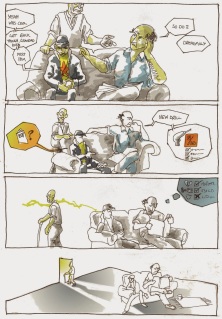 A short strip experimenting with the following things:

Colour plays a big role in comics (apart from black & white ones, of course!) – from superhero motifs to general mood-setting, but it can also be used in a more stylised way, to communicate something more specific, which was what I was trying to explore here.
Ed Hillyer’s recent “Room for Love” does this, with the brown and blue palettes coming to signify the two protagonists – initially there’s no strong reason why either colour should be associated with a particular character (any more than grey, black and yellow inherently signifies “Batman”) but by repeated use of the motifs, he trains the reader to associate the colours with the characters, building up a vocabulary on the fly.
As a side-note, for another very powerful use of stylised colour schemes, see the early Jet Li film “Hero”.