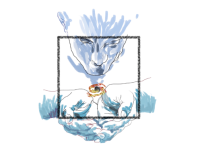 Dark Matters is a long-form comic book/graphic novel that started life in 2014 with my work with Kendal Community theatre group, and combines the life stories of several people in an unidentified war-torn country with an account of the creation of the universe (which, while scientifically accurate, isn’t told in a scientific/documentary voice). Several sections are completed already, and I’m still working at it inbetween shorter projects. 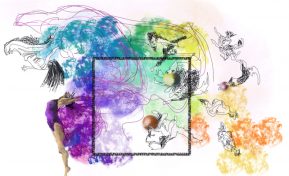 This is a collaborative work with Settle Storytelling Festival, that will be largely created over the weekend of 2-3 April. I’m inviting festival-goers to join me for part of the day to work on a series of stories under the common theme of “missing the point”, taking a story from the WR Mitchell archive, which records local people telling their life stories in their own words. I’ll supply the graphics and the art direction, and we’ll see what happens.

This exhibition was first staged in Kendal at the 2015 Lakes International Comic Art Festival, and will be returning in expanded form in 2016. Taking answers to questions about home from the staff, care workers, residents and other users of a community resource centre and accommodation for young homeless people, I constructed a series of interlinked “crossword puzzle” short comic strips, mounted on the windows of the building, which could be read from the inside or outside. The strips were also collected into a book. More images and details on the 2015 exhibition in these blog posts. 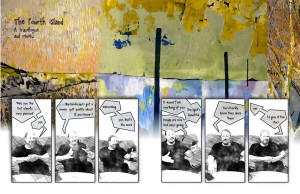 I’ll be working on this book throughout 2016, as a series of short strips that combine my own graphics with the work of contemporary artists who don’t normally work with narrative forms – fine art painters, sculptors, craftspeople. I want each piece to reflect the mood of their work, and hope to create a collection of very different stories. More details in these blog posts, including a first draft example of a collaborative piece of work.

If you are an artist, or know of any who might be interested in this collaboration, please get in touch.